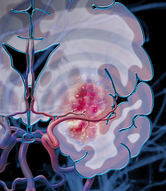 The most common form of stroke is acute ischemic stroke (approximately 85% of cases), which is caused by either an atherothrombosis in a major cervical or intracranial artery or an embolism that travels from the heart. The resulting occlusion causes a sudden deficiency of oxygen and glucose in the brain region normally serviced by the blocked artery. Victims of large-vessel ischemic strokes lose on the order of 100 million neurons per hour prior to treatment, causing immediate, permanent neural damage in the infarct area, termed the ischemic core. Further neural damage occurs in the areas surrounding the core, called the penumbra, where the tissue becomes highly inflamed and slowly dies. Stroke sufferers experience a range of neurological deficits including partial paralysis, impaired memory, loss of speech, and/or decreased cognition and many become permanently disabled, requiring institutional care. [1-4]

Unfortunately, current stroke therapies approved for human use are very limited. The only drug clinically available in the US is intravenous recombinant tissue plasminogen activator (rt-PA), a thrombolytic agent that has been shown to improve stroke patient functional outcomes. However, rt-PA is only effective if administered within the first 3 hours after symptom onset and carries with it a significant risk of intracranial hemorrhage. Consequently, only about 5 to 10% of patients can receive this therapy. Over 1,000 other potential stroke therapeutics have been tested in preclinical cerebral stroke models and approximately one tenth of these have made it to clinical trials. However, the majority of these efforts have already failed. It is likely that the most effective way to improve outcomes is rapid reperfusion of the ischemic area using thrombolytic means in combination with neuroprotective strategies to salvage cells within the penumbra and prevent them from becoming part of the ischemic core. To this end, researchers have been increasingly focused on post-stroke neuroinflammation and the role it plays in neurotoxicity and neuroprotection. [1-4]