Over the past couple of decades, nonalcoholic fatty liver disease (NAFLD) and nonalcoholic steatohepatitis (NASH) have become the number one cause of liver disease in Western countries. Recent data confirm that NAFLD and NASH play an equally important role in the Middle East, Far East, Africa, the Caribbean, and Latin America. The prevalence of NAFLD/NASH continues to increase along with its associated risk factors, including metabolic disorder, obesity, diabetes and hypertension. Therefore, understanding the mechanism of these diseases has become a priority. Recent investigations into the effect of chronic liver inflammation have shed light on the role of both the adaptive and innate immune systems in both NAFLD and NASH. Long suspected to play a part in such metabolic disorders along with nutrition and hormonal imbalances, the immune system has been of great interest to researchers for development of specific drug targets to maximize glucose regulation, minimize inflammatory damage to tissues and prevent the development of fibrosis that can lead to liver failure.

A recent report published in Science Immunology out of the Toronto General Hospital Research Institute found that in both diet-induced and genetically-predisposed obese mice, had significant differences in metabolic responses, inflammatory-markers and intra-hepatic T-cell population levels compared to healthy animals. 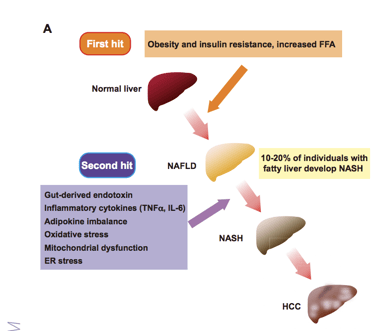 Utilizing flow cytometry, the researchers showed increased levels of CD8+ T-cell subsets and decreased levels of CD4+ T-cell subsets in the livers of mice fed high fat diets (HFD, 60% of kcal fat), with no population differences noted in the spleen, suggesting intra-hepatic CD8+ T-cells as a potential contributor to metabolic dysregulation. Confirming their results, an analysis of T-cell populations in human livers from patients with metabolic disease found only CD8+ T-cell subsets to be significantly altered from healthy patient liver tissues. To further address the intra-hepatic CD8+ T-cell subset contribution to liver inflammation, purified CD8+ T-cells from HFD mice were adoptively transferred into the livers of mice fed normal diets and exhibited a marked worsening of metabolic parameters such as glucose tolerance and impaired insulin signaling as measured by Akt activation. These data collectively suggested CD8+ T-cells as a likely contributor to obesity-related metabolic dysregulation.    ( Image source: http://dmm.biologists.org/content/6/4/905.figures-only)

After hypothesizing how these T-cells mechanistically altered metabolism, the researchers investigated the effect of type I interferon (IFN-I) responses in the liver as T-cells are stimulated by these interferons. In obese mice, there was an observed up-regulation of interferon regulatory factors (IRFs), IFN-a protein, and interferon stimulatory genes (ISGs). Conversely,  IFNaR1 -/-chimeric mice were protected from NAFLD, implicating IFN-R1 in the intra-hepatic T-cell pathogenicity present in this disease. Thus, this data illustrates the potential of IFNaR1 receptor antagonists as therapeutics for obesity and metabolic dysregulation.

Currently at MD Biosciences, our scientists have developed animal models to induce metabolic diseases, including diet-induced models that recapitulate steatosis, inflammation and fibrosis that characterizes human NASH. Contact us today to discuss your objectives and how our team is able to assist.