MD Biosciences providing up-to-date news coverage compiling posts from science journals including British Journal of Cancer, Proceedings of the National Academy of Sciences, Neuroscience News, ScienceDaily, Science Translational Medicine and Stat News, reporting fascinating and innovative discoveries happening all over the world across a wide variety of disciplinary areas. Skim the titles below to catch up on what is happening and to learn what the team at MD Biosciences is reading about. Follow the links to read more about something that catches your eye! 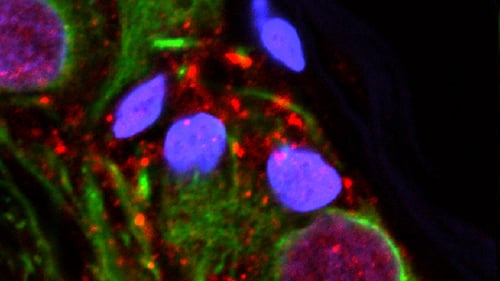 Image source: Van Andel Research Institute, neurons of the appendix contain alpha-synuclein (red), the protein that is also found in the brains of people

Can The Appendix Initiate Parkinson's Disease?

According to a study out of Science Translational Medicine, appendectomies performed on Alzheimer's patients  revealed large amounts of the protein alpha-synuclein. Those who have their appendix removed lower their chance of developing Parkinson's Disease (PD) by 20%, posing a promising treatment for symptom management for people with PD or as a preventative option for at-risk individuals. Reported by Stat News.

Scientists at the Netherlands Institute for Neuroscience and Amsterdam UMC report on the nature of T-cells, and how these cells play a vital role in immune health and the development of neurodegenerative disorders. Published in Nature Communications and reported by Neuroscience News.

Rice University researchers settle a long time controversy regarding the shape of the complex Condensin, which is a bacterial complex responsible for DNA organization throughout a cell's life cycle. The study published in Proceedings of the National Academy of Sciences determined the structure is a single ring shape, which is a major step in understanding the activity of proteins in chromosomal structures through mitosis and other cell life cycle phases. Hopefully, a deeper understanding of such will help scientists better treat genetic diseases. Reported by ScienceDaily.

Genetic Makeup and its Relationship to Obesity

Abdominal MRI imaging and genome-wide data provides evidence that a genetically pre-determined adiposity phenotype is characterized by significantly lower ectopic liver fat and a decreased risk of developing type II diabetes, heart disease and high blood pressure. 14 new genetic variants have been identified revealing where fat is stored may be more important than how much fat someone has. Reported by ScienceDaily and published in Diabetes.

At UT Southwestern Medical Center, blood-based biomarkers are helping to reveal at-risk individuals for developing auto-immune diseases. Patients who at at risk for experiencing immunotherapy complications may have underlying immune and immune-regulatory issues. Published in in British Journal of Cancer and reported by ScienceDaily.