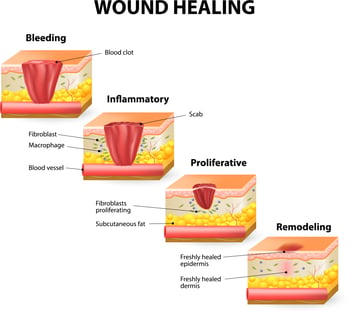 Traditional methods of wound healing measurement have inherent limitations. Measurements are affected by many variables including inter-personnel variability, inter-technique variability, inter- and intra-wound variability and wound changes over time. To overcome these obstacles, MD Biosciences has validated and integrated the Silhouette Star System (Aranz Medical), a highly translational 3-D digital wound assessment device that, together with its proprietary software, allows our scientists to accurately image wounds, quantify their dimensions and track them over time. The accuracy of the system is within 2% for area, 1% for perimeter and 5% for depth or volume (Aranz Medical). The system is approved by the FDA for clinical use, providing yet another layer of confidence for the results from these translational wound studies. In large animal trials at MD Biosciences, the Silhouette Star has been found to consistently generate wound healing data with very tight error bars.

Talk to the experts at MD Biosciences to learn how the newest technologies could be used in your studies as well.

* Models presently in development pipeline, contact us for details or co-development opportunities.

Don't see the model or assessment you require for your studies? Our scientists are highly experienced in rapidly validating models from the literature. Please speak with a scientist to discuss your requirements in detail.

Figure A.  Sub-gross image of the healing wound, including full bridging by nearly full-thickness dermal scar (~250µm width). The scar is traced with a black line and extends through the dermis and the superficial subcutis. There is slight fibrosis in the sub-cutis layer with no inflammation. Figure B. High magnification of the scar (marked in asterisks). Inflammatory infiltration is not identified. F-I (Day 10) Figure F. Sub gross image of the healing wound. Arrowheads: Dermis flanking the granulation tissue (black); Opposing edges of the epidermis (red). Figure G. High magnification of typical appearance of GT which has not undergone re-epithelialization. GT at the bottom of image is older and more mature. GT in the superficial third of section is inflamed and less mature. Figure H. Medium magnification of edge of the wound. GT fills full thickness of the wound bed. Arrows: GT junction with the dermis; Arrowheads: newly formed epidermis covering GT (re-epithelialization). Figure I. High magnification of the advancing epidermis (arrow) with mildly inflamed GT below. 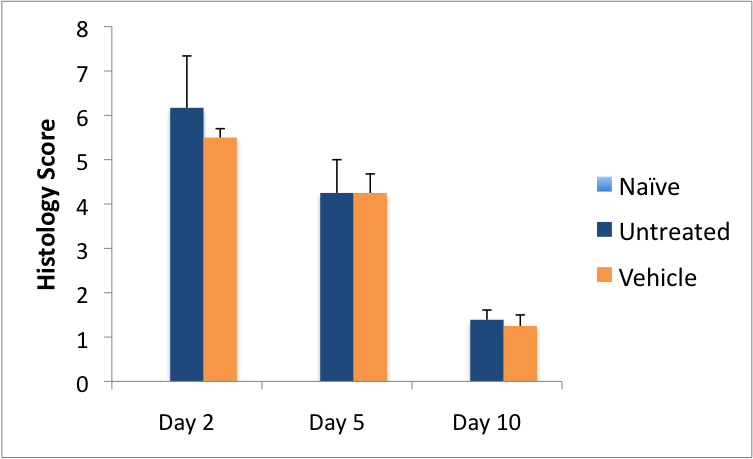 "The performance of your team far exceeded our expectations. Your input during study design, responsiveness during the study and interpretation of results was critical to next step decisions. That's something we don't see with every CRO."