Matrix metalloproteinases (MMPs) are zinc-dependent endopeptidases that function to degrade extracellular matrix. The turnover of ECM in organs is regulated by a balance by MMPs and their inhibitors (TIMPs) and the imbalance is implicated in a variety of diseases. Here we focus on the roles of MMPs in ischemia - particularly cerebral stroke and myocardial infarct.

END_OF_DOCUMENT_TOKEN_TO_BE_REPLACED

At the tissue level, inflammation ensues very rapidly after myocardial infarct (MI), initially prompted by detection of high levels of reactive oxygen species (ROS) and necrotic cellular debris by resident cells in neighboring non-infarct tissues. ROS and necrotic cell debris are also detected by peripheral leukocytes, which home to the injured tissue, exit circulation, and infiltrate infarct and non-infarct tissues. Upon entering the lesion site, these leukocytes further release ROS, proteolytic enzymes, pro-inflammatory and cytotoxic diffusible factors and participate in phagocytosis of necrotic cells and disrupted ECM. This post-MI inflammatory environment in cardiac tissues peaks at 1 to 2 weeks and generally resolves at 3 to 4 weeks after the ischemic event. While important for clearing the tissue of compromised cells and debris and preparing it for transitioning into the proliferative phase of infarct healing, inflammation that becomes excessive or chronic results in adverse remodeling, infarct expansion, and poor patient outcomes. [1-4]

END_OF_DOCUMENT_TOKEN_TO_BE_REPLACED 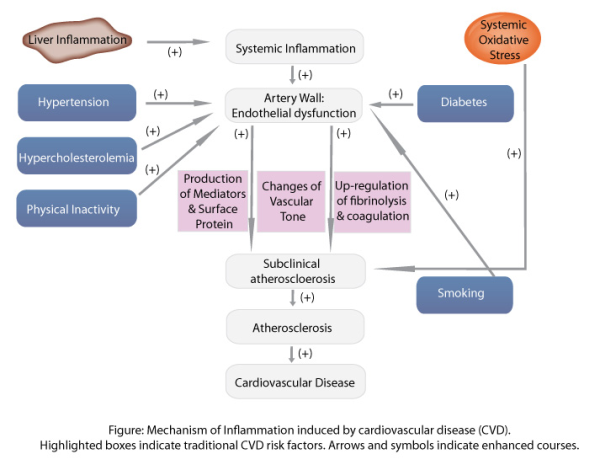 An estimated 26 million people are living with the effects of heart disease and is a major cause of death in western society. Until recently the widely held belief was that the CVD is simply the process as a build up of fat on the surface of artery walls. Eventually, this build up of fat blocks the artery and a heart attack or stroke occurs. However, the process has now been identified as a disease of the inner artery wall (intima) and inflammation is a key factor in its progression.

END_OF_DOCUMENT_TOKEN_TO_BE_REPLACED

The preclinical occlusion-induced myocardial infarct model is a well-known technique for investigating the cardio-protection of a drug therapy in the event of ischemia/reperfusion injury. The advantage of the model is the ability to study the functional relevance of a drug treatment on the heart following direct coronary flow and the mechanisms by which the drug promotes myocardial protection.