Adipose Tissue - A Site of Inflammation? 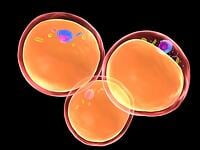 There is an increasing problem with obesity worldwide. In 2008 the World Health Organization reported that 1.5 billion adults (+20yrs) worldwide are overweight (defined by a body mass index of equal to or greater than 25). Of these figures around 500 million were classed as  obese with a BMI greater than 30 (1). Obesity has been associated with an increased risk in chronic diseases including cardiovascular disease, diabetes and some cancers. It has also been suggested that some forms of obesity are associated with low grade chronic inflammation. What remains to be elucidated is the primary trigger that is responsible for initiating the inflammatory cascade within adipose tissue.  Here, we explore the cell interactions and cytokines associated with adipose tissue and their impact on inflammatory disease.

Adipose tissue - a site of inflammation?

The function of adipose tissue is to store energy in the body for times of calorific restriction but it is apparent that fat is not just simply an inert storage organ. Recent studies have demonstrated a crucial link between fat tissue and inflammation and revealed close interactions between adipocytes and cells of the innate and adaptive immune response. Adipocytes release bio-active molecules known as adipokines, as well as secreting pro-inflammatory cytokines like IL-6, IL-8 and TNF (2). In particular, the key adipokine known as adiponectin is found at a high plasma concentration and can enhance insulin sensitivity as well as having anti-inflammatory properties. Adiponectin deficient mice have increased expression of endothelial adhesion molecules as well as increased leukocyte binding (2).Furthermore, adipocytes release chemoattractants such as monocyte chemotactic protein (MCP-1) that are able to draw monocytes from the blood into adipose tissue. Elevated MCP-1 levels correlate with weight gain and are over-expressed in adipose tissue (3) resulting in increased numbers of adipose tissue macrophages (ATM), a phenomenon which  has been demonstrated in rodent models and in humans (4). These adipose resident macrophages shift from a protective alternatively activated (‘M2’) macrophage state to a more classical pro-inflammatory ‘M1’ state due to pro-inflammatory cytokines involved in activation of macrophages like TNF-α and IL-6 (5), a crucial process in inflammation associated with obesity.

Furthermore, there is compelling evidence to suggest that IL-17 could be a key link between adipose tissue and inflammation. IL-6 production in association with adipose tissue has led investigation into Th-17 differentiation and IL-17 associated autoimmunity in obesity. T-cells from diet induced obese (DIO) mice expand TH-17 cells and produce higher levels of IL-17 than lean controls in an IL-6 dependent manner (8).  This bias towards a TH-17 like state may be linked to exacerbation of autoimmune diseases. However, it is unclear how this relates to macrophage activation in white adipose tissue, but it is clear that the process is much more dynamic than involving only a few cell subtypes.