The Value of Phenotypic Screening

Preclinical strategies used to identify potential drug candidates include target-based screening, phenotypic screening, modification of natural substances and biologic-based approaches. In the earlier days of drug de- velopment, phenotypic screening was largely employed and identified molecules that modify a disease phe- noytpe by acting on a previously unidentified target or simultaneously on more than one target. In the 1980s, advances in molecular biology and genomics led to a shift in developing compounds against defined targets that were implicated in disease. The success rate of clinical stage candidates, however has not improved and phenotypic screens are coming back into light. 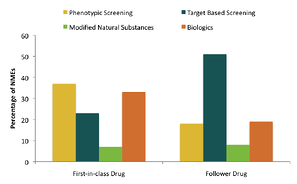 In a recent publication, analysis of different discovery strategies for 259 approved new molecular entities (NMEs) and new biologics between 1999 and 2008 showed that the contribution of phenotypic screening to the drug discovery of first-in-class small molecule drugs exceeded that of target-based approaches in an era when the major focus was on target-based approaches (Swiney, D and Anthony, J. Nature Rev. Drug Disc. (2011) 10:507-519).

Phenotypic Screening gets another look?

This has led us to develop a more comprehensive, in vivo phenotypic screening platform, Senerga®. The Senerga® Phenotypic Screening platform consists of a series of matrices designed to cover maximum biological pathways to identify pharmaceutically relevant candidates that also show no predictive toxicity effects early on in the discovery process. This enables researchers to move beyond well-defined targets from the literature or their existing programs and discover new disease biology and potential targets.

The benefit to using this powerful screening program:

With the need to move quickly and fill drug discovery pipelines with new candidates, this phenotypic screening platform is designed to efficiently screen compound libraries rapidly (within 3 - 9 months dependent on the size of the library). The resulting data is mined for hits that are identified from modified disease phenotypes and biological pathways. If you'd like to speak with a scientist about utilizing the Senerga® Phenotypic screening platform, please fill out the following details and a scientist will be in contact with you.