MD Biosciences providing up-to-date news coverage compiling posts from science journals including Alzheimer's Research and Therapy, Journal of Experimental Medicine, News Scientist, ScienceDaily,  & Sci News reporting fascinating and innovative discoveries happening all over the world across a wide variety of disciplinary areas. Skim the titles below to catch up on what is happening and to learn what the team at MD Biosciences is reading about. Follow the links to read more about something that catches your eye! 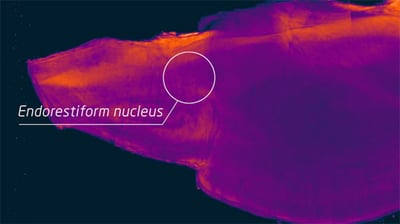 Professor George Paxinos at Neuroscience Research Australia recently discovered a new area of the brain located inside the inferior cerebellar peduncle, a region responsible for processing motor and sensory information to refine balance, posture and fine motor actions. His past 3 decades of research leading up to this discovery shows much promise for treating motor neuron dysfunction and neurodegenerative diseases like Parkinson's and Alzheimer's. Reported by Sci News. Image pictured above.

Reported by  News Scientist, a woman in China gave birth to two genetically edited twin, baby girls, stirring up a big ethical debate. Seven pairs of women and men participated in the study, all of the men were HIV-positive. Out of the 22 produced embryos, 11 were successfully edited with CRISPR technology, and only one pregnancy was successful to birth. The purpose of the experiment was to create babies who are HIV immune.

A study published in Alzheimer's Research and Therapy and reported by Sci News analyzed amyloid plaques and tau tangles, two pathological pillars of Alzheimer's disease. Researchers at University of Texas Southwestern injected a new DNA vaccine into murine skin. This vaccine encourages an immune response to reduce the accumulation of beta-amyloid and tau proteins, a promising prospect for human trials in the coming months.

A variety of lifestyle factors influence the risk of developing a range of health issues including type II diabetes. Small chemical changes in the DNA building blocks can reduce the amount of IGFBP2, a binding protein that is released into the blood to balance glucose and lipid metabolism. When the liver doesn't release enough, disruption of metabolic processes occurs, leading a team of DIfE / DZD researchers to explore epigenetic strategies, specifically manipulating the IGFBP2 gene to assess the progression and development of type II diabetes. Reported by ScienceDaily.

A study published in the Journal of Experimental Medicine conducted by scientists at Tel Aviv University in Israel  report that breast tumors exponentially increase their growth by recruiting stromal cells that are developed in the bone marrow. Results showed from this study that the recruitment of bone marrow-derived fibroblasts decreases the likelihood of surviving breast cancer, but also indicated that targeting these fibroblasts can be an effective treatment option. Reported by Gen News.