MD Biosciences providing up-to-date news coverage compiling posts from science journals including Eurek Alert, Gen News, Sci News, ScienceDaily, Nature Communications, & Proceedings of the National Academy of Sciences reporting fascinating and innovative discoveries happening all over the world across a wide variety of disciplinary areas. Skim the titles below to catch up on what is happening and to learn what the team at MD Biosciences is reading about. Follow the links to read more about something that catches your eye! 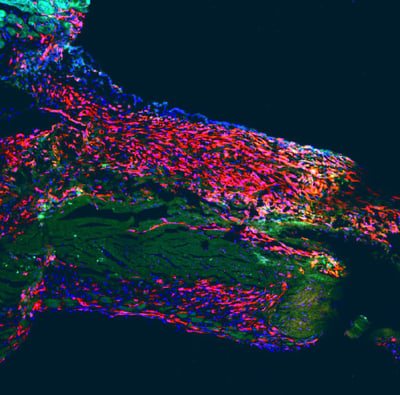 A study out of Hubrecht Institute generated a 'cell-by-cell' map of of all dividing cardiac cells before and after a heart attack using cutting-edge molecular and genetic technologies to search for cardiac stem cells--cells residing in the heart muscle that are capable of repairing and re-growing after a heart attack. Results showed there were many types of cells being divided upon the heart damage but none of them were able to generate new heart muscle. Rather, fibroblasts responded aggressively, underwent multiple cell divisions, and produced scar tissue. Possible explanations for past false leads could be cells previously named as cardiac stem cells were actually blood vessels, immune cells; but not heart muscle. Reported by Sci News and published in Proceedings of the National Academy of Sciences. View the image above depicting a murine heart wall post-heart attack.

A new gene therapy treatment for sickle cell anemia (SCA) is reversing symptoms in a preclinical research trial, showing potential for successful treatment even in resource-challenged areas of the world where SCA rates are high. At The Cincinnati Children's Cancer and Blood Diseases Institute, researchers used a modified gamma globin lentivirus vector to transfer a healthy fetal hemoglobin gene into a patient's hematopoietic stem cells. This prevents red blood cell sickling when adequate amounts of fetal hemoglobin are in the body. Reported by ScienceDaily.

Do You Have Cancer Or Not: a Potentially Simple Test For a Simple Question

Scientists at University of Queensland's Australian Institute for Bioengineering and Nanotechnology are analyzing an epigenetic pattern that is present in every type of cancer. The test analyzes circulating free DNA, molecular particles that pass through bodily fluids to measure changes in physical events like color and electrochemical signals that occur when cancer-reprogrammed DNA clumps around gold nanoparticles. Without relying on expensive DNA sequencing technology, this test provides an efficient, proactive diagnostic tool for cancer treatment options. Reported by Gen News and published in Nature Communications.

Researchers from Forschungszentrum Jülich and Aachen University have successfully produced a memrisitive element created from nanowires that function identically to a biological nerve cell. Its purpose is to save and process information and receive various neural signals. This is an ideal candidate for building "neuromorphic" processors to control and imitate the diverse functionalities of biological neurons and synapses. Reported by ScienceDaily and published in Nature Communications.