MD Biosciences providing up-to-date news coverage compiling posts from science journals including Gen News, Sci News, ScienceDaily, Stanford Medicine, Nature Communications, & eLife reporting fascinating and innovative discoveries happening all over the world across a wide variety of disciplinary areas. Skim the titles below to catch up on what is happening and to learn what the team at MD Biosciences is reading about. Follow the links to read more about something that catches your eye! 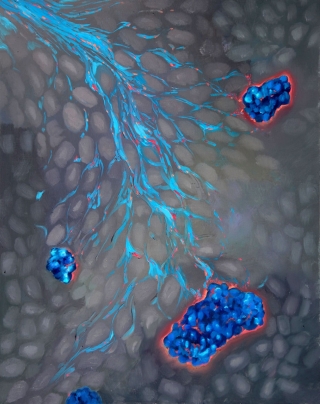 Image Credit (Stanford Medicine): Justin Annes, Tim Horton and their colleagues developed a zinc concentrated chemical compound (light blue) that helps deliver drugs triggering the production of insulin in the pancreas (dark blue) but not in other cells (gray), to replicate (red).

Zinc: A Curative Option for Diabetes

A study out of Stanford Medicine, doctors and endocrinologists are attempting to find cures for diabetes rather than just manage symptoms. The team at Stanford University found a way to target beta cells involved in the production of insulin to regulate blood sugar and it rests in beta cells' affinity for zinc. View the above image.

Sci News reports about an ingestible capsule, controlled by Bluetooth, developed by a group of MIT scientists. Using 3D technology, this pill can deliver drugs for many types of diseases and also can sense infections, physiological issues, allergic reactions, to name a few capabilities. Depending on the biological issue at hand, the pill can release a drug in response to re-establish equilibrium.

Scientists at the University of Chicago are using an advanced, high throughput sequencing technique to establish a clearer understanding of microbiome activity and responses to external changes including environmental factors, diets and availability of nutrients. In the study published in Nature Communications, the team used tRNA sequencing for gut microbiome samples from mice that were fed a high-fat or low-fat diet. Using computational strategies and software capabilities, they developed a catalog of tRNA molecules taken from gut samples, traced them back to the bacteria responsible for their expression and then measured chemical modifications in tRNA that should take place after the transcription process. Reported by Gen News.

It's known that there are strong genetic associations for various psychiatric disorders though a thorough understanding of the molecular mechanisms hinder monumental breakthroughs. The PsychENCODE Consortium developed an online resource housing integrative models to better understand the functional genomics of the human brain. The datasets include bulk transcriptome, chromatin, genotype and Hi-C datasets from over 30,000 cells for major brain regions. Scientists at the University of North Carolina School of Medicine collaborated with them to merge this data with data from other resources to create a comprehensive resource to survey functional genomics data of the brain. Published in Science and reported by Gen News.

Development for an Alzheimer's Disease Vaccine

Apoliopoprotein E (ApoE) is a protein carrying lipids and cholesterol around the brain, playing an essential role in repair mechanisms. Three types of ApoE exist: ApoE2, ApoE3 and ApoE4. People who carry ApoE4 are at a 10x higher risk of developing Alzheimer's than people who carry the other types. This aggressive protein supports the b-amyloid protein that causes the typical plaques present in the brain of Alzheimer's patients. Molecular biologists at UT Southwestern ran a study, published in eLife, with a goal of Alzheimer's development prevention. The team of biologists explored negating the ApoE4 process early to prevent late-onset of Alzheimer's, specifically in people over age 65.